Women in EHS are a rarity. Just like engineering, construction or even software development, it is always a bit of a novelty (or at least a double take) when we read ‘Ms. Jane Doe, Global EHS Lead’. I remember being on a plane leaving Berlin recently and realizing when I heard the pilot’s voice that this was the first time I’d ever been flown by a female captain – and I’m a frequent flyer. Now technically, I am not in EHS – I am part of the team at Pro-Sapien, providers of enterprise EHS software – but as the only woman in our Glasgow, UK office, I don’t hold back the little smile I get whenever we dial in to a call and the EHS Director on the other end is, in fact, female.

I don’t think it’s a case of deliberate gender discrimination. I think that – and this is supported by statistics – women just do not choose to pursue a path in health and safety. Granted, it is not among the most popular of college majors; when researching statistics, Occupational Health and Safety college majors were nearly always included as part of Industrial Engineering. Within this area of study, almost three times as many males earned degrees than females in 2009. What’s worse, the ratio has widened since 2000 when males already outweighed females 2:1. I’m not going to even attempt to answer the complicated question of ‘Why?’ but what I’d like to do is acknowledge that, despite this being an issue (gender imbalance is apparent in many fields), just as with every cloud there is a silver lining.

A nontraditional occupation for women?

In April 2015, NAEM held an event specifically targeted at women, NAEM’s Women’s EHS & Sustainability Leadership Roundtable. Over 70 companies participated, including big names such as Boeing, Coca-Cola, Estee Lauder and Lockheed Martin. The agenda covered speakers’ roads to success, realizing your full potential, an interesting event from The Red Shoe Movement and more. It’s set to be held again in 2017 in Portland, Oregon after its previous successes and is just one example of how EHS professionals are rallying together to promote women’s place in the field. 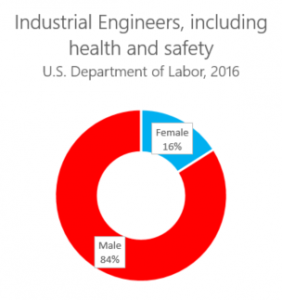 In the UK there’s a relatively balanced landscape compared to other geographies – in the SHP State of the Industry Survey 2016, 30% of the respondents were female, which under US Department of Labor definitions would (just) be classed as a ‘neutral’ occupation. In a more troubling finding, women earn nearly £10K ($12.4K) below the overall average in the profession; however, the study also notes that women have slightly less experience than their male counterparts, at 13 years compared to 16 years for men. In conclusion it’s said that, despite the growing percentage of females employed, the ‘traditional’ view of health and safety professionals in the UK remains “British/English, white, male, aged over 45, entering health and safety as their second career.” In response, in a partnership SHP is hosting the Women in Health and Safety event on 17 November in Birmingham, UK.

The US DoL classes a nontraditional occupation for woman as one in which women comprise less than 25% of total employment. Health and safety engineers fall into this category, with just 16% employed in the US in 2014 being female. Compared to 2008 when the percent was at 14.9, it’s safe to say (pun unintended) that there’s been an incredibly small increase over the six year period. Continuing at the same rate would mean that by 2022 we’d still only account for 17.2% of those employed in the field. However, it’s still an increase. There are many occupations where the rate has held steady or even declined, including, as I mentioned earlier, software developers. This fell from 20.9% female in 2008 to 19.8% female in 2014.

What you can do - and what you're already doing

EHS engineering, supervision or management are still nontraditional occupations for women, so let’s continue to quietly smile every time we come across one another but strive to change perceptions one girl at a time. Maybe one day it’ll no longer be a novelty and we won’t even think twice when we discover Jane Doe is leading the company’s global EHS department. In the meantime, let’s flip it on its head and enjoy the sense of community in being a woman defying tradition, because it really is a heck of a silver lining shining through.

That landscape can be interpreted as pretty glum, but efforts are being made to encourage women that EHS is a viable occupation option, and to support the women already in EHS in their career success and enjoyment – case and point, the upcoming NAEM conference. The aim itself is not a 50/50 balance (although that is the ideal end-goal), but to give girls and women the confidence that they can excel in a field so traditionally taken up by men. Be that because EHS is prevalent in high risk industries also dominated by males (e.g. heavy vehicle and mobile equipment service technicians and mechanics – 211,000 employed in the US, of which just 0.5% are women) or because it’s “just the way it’s always been,” it’s important we pay attention to and promote a message of equality. So take part in an event, join a group, partner with universities and talk to young people about the profession… there are numerous ways to encourage women into EHS, but arguably, the best method of influence is to set an example. And guess what? You’re already doing it.

“Setting an example is not the main means of influencing others, it is the only means.” - Albert Einstein

You can also follow Women in Health and Safety on Twitter, @WomenHS, join the group on LinkedIn, or sign up to the upcoming event if you’re in the UK.