Our latest guest blogs is reprinted here by kind permission of Dr. Rob Long. In this article, originally published at safetyrisk.net, Social Psychology expert Dr. Rob Long, discusses the power of the visual and the history and use of safety icons.

PPE iconIcons are powerful modes of communication and predate text and print. Danesi in The Semiotics of Emoji demonstrates that we are seeing a re-emergence of the power of icons in everyday communications. Indeed – SMS, emoticons, emojis and graphics/multimedia are changing the very way we communicate. Icons are profound and significant because visuals burn quicker and more permanently into the unconscious long-term memory. Text and aural communications are harder to remember/learn as they operate mostly in short-term memory.

Icons are powerful because they have an emotive and ‘poetic’ effect and as symbols convey much more than themselves. Carl G. Jung (Man and his Symbols) demonstrates that iconic thinking has been common to all cultures and civilizations since cave dwellers could scratch on a wall. Indeed, manadalas are also shared across civilizations and cultures as icons of life force and dialectic. Icons are most powerful because they communicate to the unconscious . Baudrillard (1983) called this the ‘simulacrum effect’.

The history of icons finds its foundation in religious semiotics (sign systems). For example, Egyptian hieroglyphics are completely iconic and religious. A visit to the catacombs shows how the early Christians told stories and created identity through icons. When I visited Communist China in the 1970s, the same use of icons was used to communicate identity and belonging. Sometimes only the initiated or educated knew what the icon meant.

One of the ways the Protestant Reformation (celebrated recently through the 500 year anniversary of Luther’s ‘protest’ – http://time.com/4993119/protestantism-martin-luther-500th-anniversary/ ) marked its rejection of Catholic theology was through iconoclasm (https://en.wikipedia.org/wiki/Iconoclasm), the destruction of icons. Iconoclasm has always been a target of revolutions and destroying enemies. If one wants to demonstrate power over another, just target their icons. If you want to find out how powerful icons are in themselves, just try to remove or deface one.

In the modern world icons have become an essential part of marketing, brand, identity and belonging. In safety the use of icons is extensive, not just through signage but in communicating philosophy, ideology and meaning.

Of course the most dominant icons in the safetyosphere are objects: zero, triangles/pyramids, curves and PPE dominate the iconography of safety. It is amazing that when anyone seeks to communicate what safety is about or to brand safety they anchor to a cone, glasses, boots or hard hat. Isn’t it indicative that in an activity that seeks to help people keep safe that there are few icons about people. Safety iconography is all about objects. You will rarely see a safety icon that depicts people talking or conversing about risk. It doesn’t matter whether it’s young people in safety, women in safety, safety differently or a safety association of some sort – the icon is objects. The cone, glasses, boots, triangles and hard hat rule as the ‘go to’ anchor in safety. Why does this matter?

When we anchor icongraphically to objects we communicate to the unconscious what should receive privilege in our thinking. When we anchor identity to objects it is more difficult to prioritize subjects in automatic focus and heuristics. When we identify with objects we tell everyone what we think safety is all about. As long as Safety continues with the prioritization of objects in iconography people will think safety is all about high-viz and glasses.

Unless safety iconography shifts from objects to subjects, it is not likely that it will be seen as a helping activity but rather a policing activity. At the Global Safety Congress 2017 this disconnect was voiced as one of the greatest concerns, that safety was perceived as policing and not focused on people. The Congress had as one of its goals to be people-centred and what was its icon? 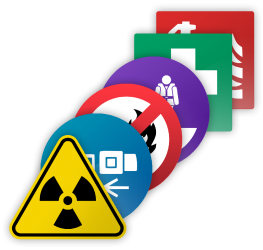 Safety signs are needed in all areas of the workplace. You can find signs for all purposes from our set of 135 Royalty Free Health and Safety Icons Pack. Get the set to your inbox now »