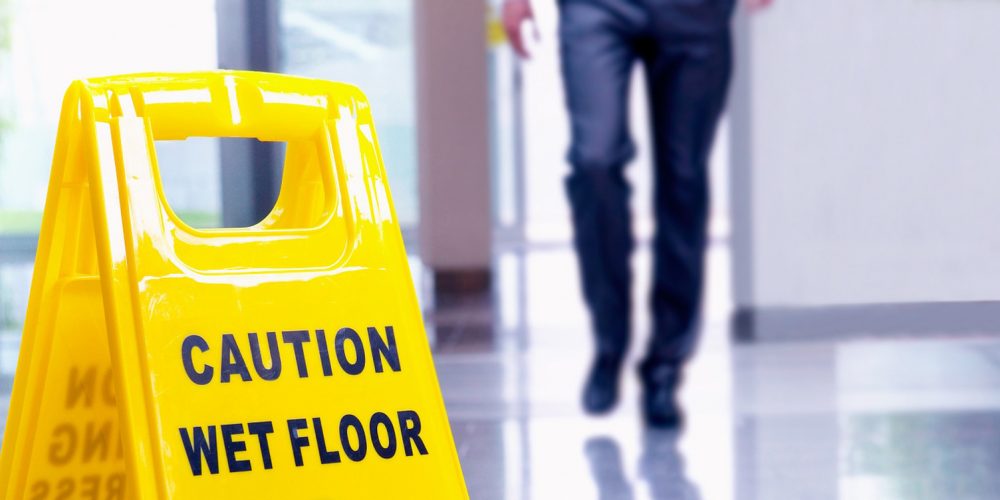 The fear of falling is with us from an early age and is typical of most humans and mammals. Dreams in which we fall have been deemed “typical dreams,” meaning dreams we all have that have the same meaning for everyone. Slips, trips and falls are a fact of human life spanning time, region, gender and culture, and have, in the workplace, become the second top reason for workplace injury in the US.

So, in the midst of winter (an especially icy one in many places) when emergency room visits for injuries caused by slips and trips increase significantly, what can safety professionals do to protect employees?

Slips, trips and falls a risk to all

Although a slip on ice might simply mean a painful coccyx for some people, slips, trips and falls (STFs) actually account for 15% of all accidental deaths at work in the US, second only to motor vehicle accidents, with the most frequently cited OSHA standard in FY2016 being Fall Protection. It’s a similar picture in the UK where 40% of all accidents reported to the HSE are from STFs, costing employers around £512M a year in lost production.

A slip, trip or a fall can happen anywhere, be it at work or at home, but employers have a responsibility to protect their employees by putting in place reasonable preventative measures. Recognizing the factors that contribute to STF injuries allows safety professionals to plan ahead and minimize the risk; these factors might be unsuitable floor surfaces, wet/contaminated floors, unsuitable footwear, poor lighting, obstructions, and uneven surfaces.

It is perhaps unsurprising that the number of injuries caused by slips, trips and falls increases during fall (autumn) and winter. Commonly understood reasons for this could be:

Preparation for and reactions to these seasonal changes can be seen left, right and center in countries or regions where the four seasons are pronounced; however, where dangerous factors such as snow and ice are less expected, workers and civilians may not be so adapted - as we have seen in the uncharacteristically cold winter of 2017/18.

If you are in the eastern regions of North America, you will be no stranger to the dangers posed by icy conditions – the area just experienced record-breaking low temperatures brought about by a “bomb cyclone,” otherwise known to meteorologists as “explosive cyclogenesis.” There was snow as far south as Florida, a state unaccustomed to any snow and thus inexperienced in mitigating the consequential risks. It is undeniable that the risk of slips, trips and falls is largely influenced by the weather.

Inexperience with icy conditions can also be seen in across the Atlantic the UK – certain National Health Services (NHS) groups saw increases of 50% - 200% in Accident & Emergency visits in December 2017 compared to the previous year, adding to the strain that hospitals are already currently under. Although the weather plays a part, employers and councils play a bigger one in minimizing the risk of injury to workers and civilians. The volume of ice and snow that the UK has experienced this winter is rare, and although certainly more common than in the sunshine state, the country is not well practiced in driving or walking in slippery conditions.

Many in the UK often wonder how comparatively small amounts of snow can cause such disruption across the country:  when bad weather is forecast, the UK Met Office does a cost-benefit analysis to work out the cost of a day of snow chaos compared with the investment needed to avoid it, and the benefits of that, in order to make decisions about what to do. Subsequently, gritters are often held back and the public is left to their own devices. However, for employers the option of doing nothing – or very little – is not as excusable.

How to minimize the risk of slips, trips and falls

It is impossible to completely cancel out the risk of an employee having a slip, trip or a fall at work. Furthermore, same-level falls are harder to prevent than elevated falls, the risk of which can be tackled with solutions such as barriers. However, there are steps that employers and safety professionals should take to minimize the same-level slips, trips and falls risk.

What employers can do

Carry out a risk assessment. Ask employees what they think the hazards are, as they might have identified factors that are not obvious and have valuable ideas on how to control the risks. Use a hazard spotting checklist to identify problem areas.

Stop floors becoming contaminated. Use the right cleaning methods, consider the flow of the work environment, and think about human and organizational factors such as the route a worker might take to get from one job to the next.

Monitor the weather to know what to prepare for in advance. It may seem trivial, but many preparations for icy conditions should be carried out before the ice materializes, such as getting winter tires onto vehicles or arranging that parking lots be cleared before workers arrive.

After a spillage has been cleared, mark the area. In sub-zero temperatures this could become “black ice” and be a difficult hazard to see. Bear in mind that you might have to tackle the same area more than once.

Provide employees with appropriate footwear. It may be surprising that there is no regulatory requirements set for slip resistance in footwear (as there is for toe protection or puncture resistance.) However, employers may want to look out for is a testing standard called ASTM F-2913 set out by the American Society of Testing Materials (ASTM.) This standard is better known as the “Whole Shoe test,” explained in this ISHN guide to slip resistance in safety footwear.

What employees can do

Preventing slips, trips and falls is not a battle for only the employer. Employees (and civilians) must take their own responsibilities seriously, too.

Employees should report not only accidents but near-misses to their employer. Steps can then be taken to prevent the same problem from arising again.

If you are an employee, when you see a spillage you should clean it up or arrange for it to be cleaned up. Then the area should be marked.

Keep the workplace tidy. It’s a simple but effective one!

In icy conditions, employees should give themselves more time to get from A to B. Rushing and slippery surfaces is not a good combination. Walk purposefully and keep an eye out for hazards that are not usually present.

Employees should keep their hands empty when moving, so that they are free to use them to stabilize if necessary. Issue backpacks if possible so that employees do not need to carry items in their hands.

All seasons are not equal

Although slips, trips and falls increase in the fall and winter, the same cannot be said for incident rates as a whole. In fact, according to the Bureau of Labor Statistics’ report on Injury Rate per 10,000 FTEs, the most dangerous months for workers are between April – September when the average Injury Rate Index is 1.05. From October – March, the average IRI is 0.96. So, it is not all bad news this time of year – there are plenty of reasons to be cheerful, despite slips, trips and falls not being one of them.

A risk to all, the responsibility of all

If falls can happen to anyone – we will probably never stop falling over as beings bound by gravity – then, like the dangers posed to workers by heavy machinery or chemicals, the risk should be addressed with great importance. I say this not only for the employer, but for the employee and/or civilian who bears (at least some!) responsibility for their own safety.

53% of unintentional injuries occur at home compared to 13% taking place at work, so whether you are a safety professional, high risk industry worker or simply a passer-by – after all, we all have those falling dreams – take care to avoid slips, trips and falls this winter!

Work injuries can be predicted with very high accuracy rates. Some companies have reduced injury rates by more than 90%! Read this whitepaper by JSA Services today and find out how one business is using Power BI for predictive trending.